The Club meets every Tuesday at the Church of the Good Shepherd, New Road, Mytholmroyd, HX7 5EA (adjacent to Mytholmroyd railway station) starting at 19:00hrs. These meetings might include construction, discussion, teaching, sessions on air, Morse training or other activities.

Club Home is the official Club website and gives current information about the Club, where we meet and when etc.

Photos scrolls down this page to M0EZP’s personal HADARS photos.

New to Radio brings you to the Radio Society of Great Britain’s website, describing amateur radio and providing lots of useful information on getting started!

The RSGB broadcast the Amateur Radio news every Sunday on various frequencies on Short Wave and VHF using the call-sign GB2RS. You can also listen to or subscribe their Podcast

Norland is an upland area to the south-west of Halifax and has been inhabited since pre-historic times. The picture below is of Ladstone Rock. The place names in this part of the West Riding are typically Norse on the hilltops and Celtic in some of the western valleys. Lad in norse means pile or heap which makes some sense.

Peter G0JKW luckily has family connections which allowed us to use this excellent spot for the tests with great take off to the south in particular.

Rishworth and The Royal Oak (with video), May 2007 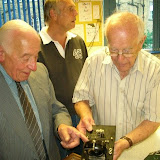 Shows most of the members of HADARS in May 2007 both at Rishworth and in the gloom of the room at the Royal Oak, Halifax, where Colin M5AEH demonstrated a Van De Graaff generator.

Click on the image of Tony, John and Maurice to view the gallery

An enjoyable afternoon out visiting Tony G0DLX (left) with Maurice G3MMK (right), both sadly now silent-key and Gary 2E0GSC (not in picture).

We helped Tony to raise a new delta loop aerial and thoroughly enjoyed ourselves.

These two gentlemen were engineers who have been at the height of technological endeavour in electronics and radio.

I am incredibly grateful to them both for their guidance in my construction projects.

During the afternoon, a number of distant european stations were worked.

A number of locals dropped in – Des G3JWN (SK) (centre), David G6OCD & Michael G1XCC. One enterprising youngster asked if we might be able to broadcast any of his group’s material (Jimmy Hendrix, Led Zeppelin style)!